Washington, D.C. (JFKASSASSINATION) On November 29, 1964, The President's Commission on the Assassination of President John F. Kennedy was established by an executive order signed by President Lyndon B. Johnson.  The body, better known as THE WARREN COMMISSION*, was named after the chairman, Chief Justice Earl Warren.

The Commission relied on the FBI investigation which concluded that three shots were fired,  the first hitting JFK, the second hitting John Connally and the third hitting JFK.  James Tague says that in June 1964 the Commission was all but ready to make the same conclusion when he "spoke up" about a bullet mark on a curb in Dealey Plaza that had caused a minor wound to his cheek at the time of the assassination.

Tague argues that his testimony to the Warren Commission "changed history"
because only three shots could be allowed for a single shooter in the Texas School Book Depository.   The Commission then concluded one shot missed and hit the curb, one shot hit JFK in the head and one shot caused all other wounds to both the President and the Governor.**

Sherry Fiester writes that the Commission bought the idea that one bullet had...

"passed through fifteen layers of clothing, seven layers of skin, and approximately fifteen inches of tissue...removed 4 inches of rib...shattered a radius bone, and remained nearly in pristine condition when found..."

Some refer to this one projectile as "the magic bullet."


*WC's final report included 469 pages with 410 pages of appendices.  It was presented to LBJ Sept 24, 1964. 552 witnesses testified after which the WC concluded that all shots were fired by one shooter and added..."On the basis of the evidence before the Commission, it is concluded  that Oswald acted alone."

**Single Bullet Theory--one bullet entered the back of JFK's neck, exited out his throat then entered Connally's right shoulder passing through his upper body, breaking a rib, then exiting under the right nipple continuing  on and entering the right wrist, breaking the radius &amp; deflecting into the left thigh. SBT was required in order to match with the Zapruder Film which showed JFK and JBC both hit in less time that the bolt action rifle associated with the shooting could fire one round. 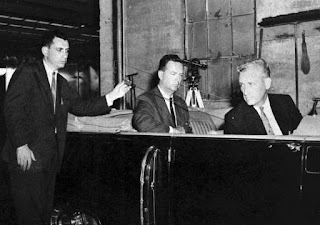 Rick Ryan's new song "Childhood's End" pays tribute to JFK & describes the impact of his death on a generation of America's youth. Check it out at www.childhoods-end.com/